Thanks for your input todate. Here is a collection of my thinking at this point. Please feel free to participate in this on going discussion. Your contributions are appreciated. Tell your A&A friends about this so they have a chance to voice what they want in A-A&A. I'll update the the original posting as changes and new ideas are adopted or contemplated.
Post Reply
25 posts

I think this new peice should be a Hummer.. I know they didn't have them in WWII but I am from Mishawaka, IN where they are produced.. and would love to own H1 Hummer.

Plus the halftrack piece will look so cool!

Regarding Mechanized and Motorized ...

I have no problem with either term. But motorized is less fitting in my mind since technically most of the American Army was motorized; that is they were transported long distances in trucks. This made them move faster than the German infantry, but not on the attack.

Mechanized implies that the infantry unit rides into battle and is accompanied by some armor -- halftrack, light tanks, armored car and good recon vehicles. Thus they are more powerful than infantry (motorized or otherwise) since they can bring a substantial amount of firepower with them, are armored and can exploit flanks quickly. Halftracks of course are not just armored infantry carriers, but came in all flavors of hvy weapon platforms.

Again, I love this idea.
Top

Here is my choice for HAlf Tracks

Dick Winters to 2nd Lt. George Rice after being told that the 101st Airborne would be surrounded at Bastogne

The JAPANESE never embraced armor like the other combatants. They didn't have half tracks at all. Japan's didn't have the fuel to spare from their navy and airforce to provide their infantry with motorized transportation. In fact the Japanese had entire Battalions mobilized on bicycles (you've probably seen the footage).

The closest thing to a Japanese halftrack would be the Type 92 armored cars:

Historically Japanese Armor should be weak (weaker than the other combatants) in AA Advanced and Mechanized Infantry should not be available to them (imo).

Of course AA allows you to recreate different decisions in ww2, so it is possible to think the Japanese would have given less priority to the navy and diverted those resources to armor and halftrack/armored car production. Still, using the armor they made as a baseline, you can't conceive of them producing (in quantity) any tanks or halftracks on par with the other combatants.

So I vote for no mechanized Inf for Japan. They should be concentrating on the Pacific anyway

The RUSSIANS did have their own half tracks, in addition to the US lend lease M5s and M17s (hvy weapon platform).

They weren't armored like the US and German half tracks, as their primary purpose was transport through mud/snow, and not an assault vehicle. 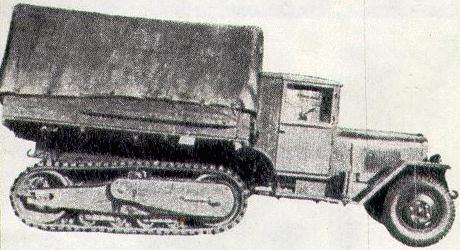 I've seen some modelling kits that have a variation with a 37mm AA gun in the bed, but I've never come across any stats on what weapons were mounted. My impression (can't recall the source) is that the Russian made half tracks were not a vehicle designed for the army, but rather a vehicle made for agricultural purposes.

The BRITISH made the Bren Carrier and the Carden-Loyd Universal Carrier. Both were used as an infantry support carrier (ammunition, guns/arty, mortars). It was NOT a troop carrier. The Brits used the M5 (US) as their armored troop carrier, and so the M5 should be used for the Mechanized Infantry piece.

thoughts for uk, wasnt sure if larry is going to provide each countries equivalent to mechanized...good stuff d6

When I first thought of this idea you guys were tossing around, I locked onto the German and US halftracks, and how cool those models will look.

The thing is, implementing non Tank vehicles isn't so straight forward since you have a whole gambit of vehicles and different uses.

So really what we are talking about adding is a mounted infantry unit that moves with the armored spearheads. If that is the case, then we are talking about a formation/army that is in some cases more powerful than an all tank army. The reason is because you have the infantry support mixed with the tanks and keeping up with them and scouting for them.

So, why not consider the mechanized unit to be more expensive and more powerful than the tank unit?

Consider it for a moment.

I believe you're going with D12; so you have the room to work.

A formation of light/medium tanks, supported by armored car recon and mobile infantry support. You've got a unit that can spearhead assaults (high attack), breakthrough (high movement) and hold a location (high defense) with armor and deployed infantry.

This seems more realistic to me and you can account more accurately between the different nations by factoring in the types of vehicles used by the nations. The Germans and US have their superior halftracks, the Russians mobilize their infantry mostly by riding tanks and trucks and the Japanese ... well they have armored cars and bicycles.

I really believe it fits better. Consider it.

The cool thing is that you can expand combined arms: self propelled guns and towed artillery can be represented by allowing one artillery piece to move 2 spaces with one other Mechanized unit.

Of course if the tank unit is really what represents this type of mechanised unit, then really what we have left in the gap between tank and infantry unit is an infantry unit using trucks to move 2 spaces a turn, in which case I would argue for simply making a land transport unit. It would would look like a truck or halftrack and would work like a sea going transport except on land.
Top
Post Reply
25 posts