Next axis and allies

Got a question that you'd like me to answer?
I'll be checking in on this thread now and then and hope I can answer any questions you may have.
Post Reply
39 posts

Hey imperious leader. Are you sure Larry is making a civil war axis and allies or are you guessing? Civil War would be awesome. So would the War of Independence.
Top

Can't say where i got this. Perhaps latter

I do love the idea of doing a Civil War game...That period has always fascinated me! I'll probably do it one of these days. In the mean time my attention and focus is on the Roman Empire.

GTO http://www.gametableonline.com/ will be featuring my Conquest of the Empire game. I'm seriously considering publishing my own brand new and updated board game version of this old classic. I've got some great ideas for this game. Perhaps I'll put it on Kickstarter to see if there's any real interest in such a product. If that worked perhaps I could start publishing my own stuff. Interesting.
LH
We really need an Axis and Allies World War one game so i can play that on August 1st, 2014.
Top

That is good to know, thank you.
Either era would be great and a good seller.
Top

I have never played Conquest of the Empire so I woułd definitely buy a remake. The Roman Empire interests me but I have limited knowledge about it.
Top

Hi AC,
Well you'll be having plenty of opportunity to be playing it soon enough. I expect the game to be available on Game Table Online probably in October or November. Your having not played it yet is probably a good thing. It leaves plenty of opportunity to be pleasantly surprised. I have been working on the game for for the past few months. I think I've introduced a couple of new features and have smoothed out some of the game's rougher edges. At some point I hope to make it a Harris Game Design board game.
Top

You already got two versions of COTE, plus this upcoming online version.

I know you're doing a Civil War game. Just admit it. I see those notes in the folder.
We really need an Axis and Allies World War one game so i can play that on August 1st, 2014.
Top

Oh and for inspiration get out the American Heritage Civil War by Bruce Canton and the two page color battle plates of hundreds of little confederate soldiers.

Instead of an infantry piece-- a plastic piece that would form two rows of soldiers advancing with flag in the center. People could make little flags and paint them. 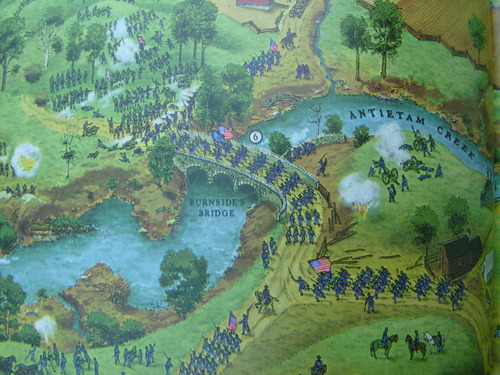 Long before Axis and Allies, i would spend hours looking carefully at these pictures and wonder, "I wish they made a game like this with small plastic men"
We really need an Axis and Allies World War one game so i can play that on August 1st, 2014.
Top

I would love to see a new version of Conquest.

I never really got into the abstract political aspect of COTEII, so I'd like something more along the lines of the original, but with Barbarian invasions (real barbarian armies, not abstract cards) and a DYNASTIC* element.

Also, the Empire would start fully realised; the original was supposed to be set on the death of Marcus Aurelius (180), so the players expanding the Empire from "home" territories didn't make sense.

Rather, have the territories each fully garrisoned but assign loyalty of the legions by drawing cards at setup.

Then there are the roads. Ah, yes, the railways of the ancient world.

They would of course already be fully operational within the Empire, but would have to be built when conquering barbarian provinces.


I also favour a more organic growth of settlements:

when you first conquer a barbarian province, build a fort. After a period within the Empire it grows into a city, after another interval into a regional capital.

Conversely, if a province is captured the settlement is sacked and reduced one step.


Another possibility: the game features the fall of the Empire, in so far as players can gain control of various barbarian tribes and eventually, as inflation weakens the Roman system, the barbars might overrun large parts of the Empire. This would probably mean using a victory points method.
Last edited by Flashman on Wed Aug 07, 2013 6:11 pm, edited 1 time in total.
I'm so ******* haaaaaaaaaaaaaaard.

Return to “Talk to Larry”

Users browsing this forum: No registered users and 5 guests